THE SEARCH FOR WITNESS AND ITS EMPLOYABILITY

From the beginning of history, human beings have experienced the need to build objects that facilitate their work and improve their lives. The talent accumulated over centuries translates today into Artificial Intelligence, autonomous vehicles and virtual assistants. The current historical moment is the universalization of the Internet that enables, and even demands, the transnationalization of the Economy. In this renewal, the potential lies in the technological competences of the population and in the ability of the system to adapt to digitalization and be competent in the global and local market. The tandem between technology and economy employs 17 million people directly and 15 million indirectly (GSMA, 2017). However, traditional jobs in which people have been replaced by machines have also been destroyed. The global effects of computer science are undeniable and in order to take advantage of them in a positive way, we must concentrate on two areas: on digital professionals and on the production and attraction of talent. While in the past the ingenuity was presented to companies, now it is the companies who must generate, attract and retain professionals from the technological environment. The current conversation addresses the relationship between the quality of ICT schools and the employability of young people in the market labor, that is, their training as workers with digital skills. These are the foundations that a country has to take advantage of the economic potential of globalization. 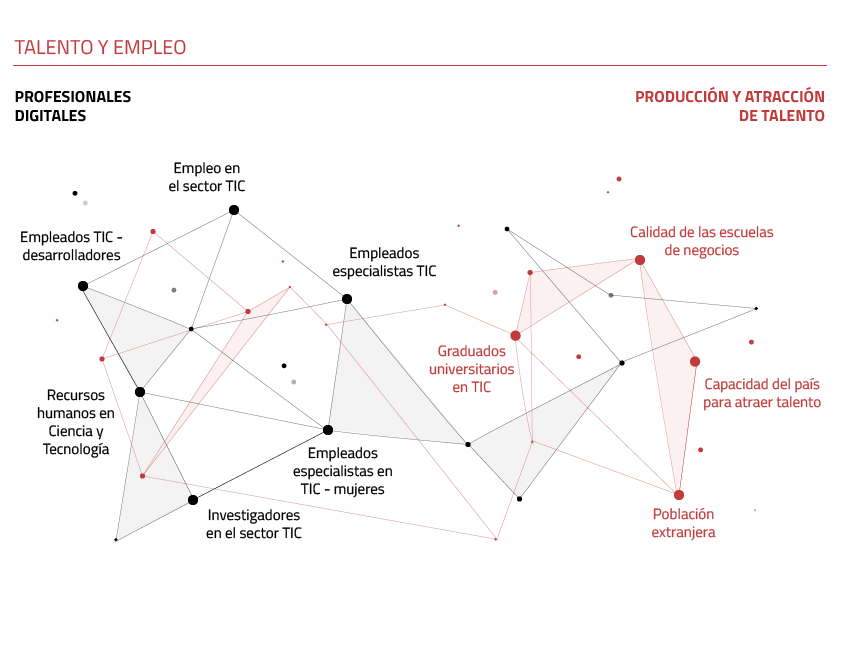 Several reports from the OECD, the European Statistical Office (Eurostat) and the World Economic Fund (WEF) break down these two categories to analyze in detail how they are connected and how these bases can be improved.

Generation of technological employment is Spain, towards specialization

In the first place, it is necessary to examine the digital labor market in its two aspects. On the one hand, employment in the sector of information and communication technologies and, on the other, employment in activities that require the use of these skills, regardless of the main activity of the company. Included in this last level are works such as developers, ICT specialists, women ICT specialists, human resources dedicated to science and technology (HRST) and researchers of these technologies. To obtain an overview of the The magnitude of the technological sector in Spain, the National Observatory of Telecommunications and the Information Society (ONTSI) estimated that in 2017 there were 23,427 companies in this field. These employed 367,906 people in ICT manufacturing activities and digital services such as electronic commerce or telecommunications activities. Currently there are 2,847,735 registered companies in the Social Security in Spain, according to the figures of the Ministry of Economy, Industry and Competitiveness of January 2018. Compared to the other countries that have been contemplated in the reports mentioned, Spain is not so well positioned generally in terms of job creation in the specific ICT sector. However, when it comes to specialized ICT jobs, regardless of the sector in which the company operates, Spain stands out with respect to European and global digital leaders. This is evidenced in the OECD reports of 2014 and 2016 that reflect that the Spanish economy is ranked number 13 out of 30 in relation to the employability of women specialists in the digital world and in the eighth out of 19 in number of specialist developers. In this sense, and although the gender gap remains wide, the National Statistics Institute (INE) together with the ONTSI showed in its report ‘Indicators of the Information Society by gender’ of March of this year that, when try to find work, women are more digitalized. Although the difference is small, 23.4% of women use the Internet to seek employment while for men this percentage is 22.4%. 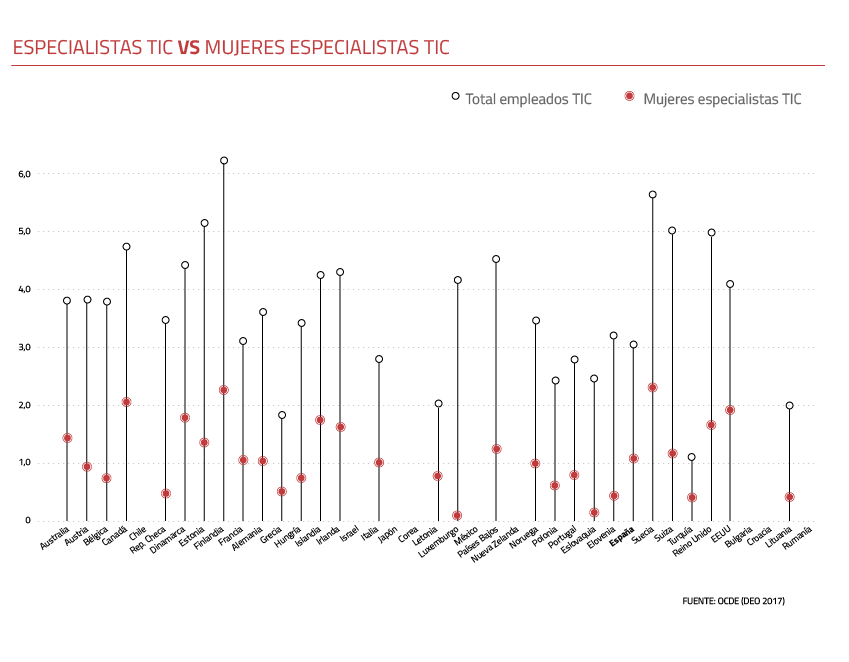 In addition to the creation of employment in Spain, the second condition referred to in the OECD and WEF reports to achieve a competent digital economic system is the ability to produce and attract talent. It is necessary to think about where these professionals come from, if they are formed within Spain or if it is nourished by people from other countries. Here, the most important indicators are the number of graduates in ICT and the ability to attract foreign potential in relation to the immigrant population. The preparation to attract talent in Spain is not as high as the experience that has to produce it. Within the Spanish territory 13% of the population is foreign, up to 6.1 million people, but few of them are employed in jobs related to technologies. Based on these figures, the WEF determines that Spain is not as competent as other European and world leaders (Sweden, Singapore or the United States, among others) to occupy foreigners in ICT. However, the potential of other countries in this field favors the Spanish population to work in other countries and this flight of professionals slows the advance of the digital society in Spain. 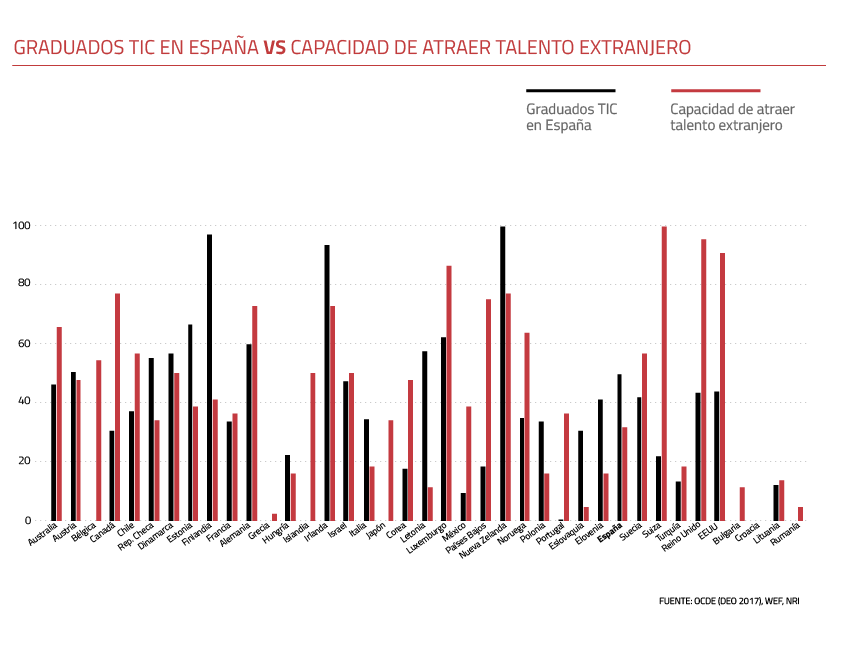 Although the attraction potential is not as great as that of other countries, Spain needs specialized professionals. According to a report by the main technology employment portal (TICJob), the positions most demanded by companies today are the programmer, the programmer analyst and the consultant, as indicated by the employability reports. The European Commission foresees the creation of between 750,000 and 900,000 jobs related to technology that will not be covered in 2020, of which 85,000 will be in Spain. To encourage the arrival of professionals, the European Commission has launched the “Horizon2020” initiative to finance the research sector in Science and Innovation (HRCT). For 30 years more than 200,000 million euros have been invested in this field and a new investment of 30 million euros is planned thanks to this program, funded in part by the European Research Council. It is necessary to promote education in science and technology, not only at higher levels, but also throughout the entire educational process. Having human resources with digital skills is one of the great challenges for the economy of the 21st century. This, in line with the improvement of visibility of the existing talent attraction programs, is one of the foundations of the digital economy today.

scroll
We use cookies to obtain statistical information on the browsing of users through the web. If you continue browsing, we will consider that you accept its use.
OK Read more