In spite of the advances that have taken place in recent years, Spain does not hold a relevant place in the group of countries leading the transition to digitalisation at the global level nor in its European context. This means that the country has not been able to capture the value associated with this leadership, which results in opportunity costs in terms of growth and job creation.

The tremendous scope, potential impact and uncertainty associated with the digital transformation (understood as the creation, implementation and effective use of the new technologies) implies the need for all players – government, private sector, citizens – to possess more precise data, engage in dialogue and take action. A significant return is expected on the efforts to be taken in this field: mobile technologies and services are already responsible for 4.4% of the GDP at the global level and for 28 million jobs1, and estimates indicate that each additional dollar invested in ICT infrastructures can contribute an additional 5 dollars to the GDP by 20252. In the specific case of Spain, this digital reinvention may have an impact of between 1 and 2 points in the GDP annually until that year3. 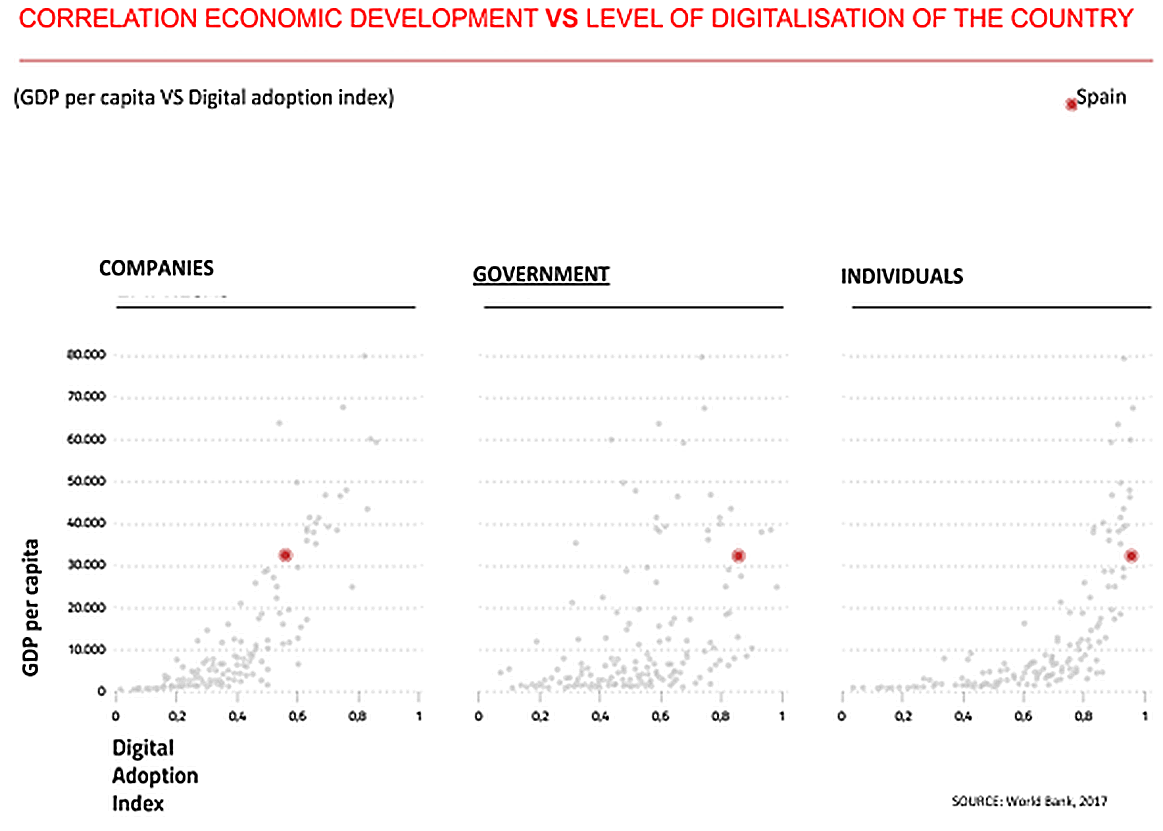 Accurate and reliable measurement of the evolution of the digital economy is needed so that governments and companies can design and implement evidence-based policies in an environment that is much less stable that the one that has characterised the 2nd half of the 20th century in Western societies. As the digital economy develops exponentially, the manner of evaluating and measuring it must also change.

The advance of information and communications technologies and of global interconnectivity has a great potential for accelerating progress, helping to close digital divides and to develop the knowledge society4. Nevertheless, the effects of the transformations derived from digitalisation will be different in each country and according to previous levels of development. It appears that the main beneficiaries will be the countries or cities with high concentrations of talent and great potential for economic growth5, but it also seems clear that the benefits will not be distributed evenly. In Europe, although it is expected that the impact of digitalisation will benefit the continent in its entirety, some countries appear better positioned to take advantage of the new opportunities than others. A high price may have to be paid for failing to act: although countries are more diverse, and in general more resilient than companies, they cannot afford to ignore the major changes that are taking place in the competitive environment in which they operate6.

Digitalisation is not an end in itself, but rather a means for the economy to advance; for improvement of technological capacities; for bringing about a fundamental transformation in the way that human beings, technology, businesses and the society interact

There is a strong correlation between the degree of development of a country (when measured, for example, by its per-capita GDP) and its level of digitalisation, but, even in the most advanced economies the process of digitalisation of the economy is in its initial phases. Its impact on productivity and efficiency can be a fundamental factor in mitigating the negative impact of the ageing of the population, since it is a critical factor in enabling the development of knowledge-based societies and transforming them into information societies7.
We find ourselves facing a multi-layer revolution: digitalisation is creating opportunities for entrepreneurs and enterprises, and it provides enormous benefits to consumers. But at the same time, existing practices are modified: it exposes established practices to greater competition, changes the needs for training of workers and entails job losses in certain countries and sectors8. Its effects extend to the configuration of global value chains, requirements for training and knowledge, production and commerce, and it will necessitate adaptations in multiple areas of current regulatory and legal contexts.

In the digital era, competition is increasingly global, as technology enables companies to increase their geographical reach by doing business across borders. In order to maintain competitiveness over the long term, European countries must be able to compete globally, both to increase their share in the global market, and also to protect their share in local markets, at the same time that geographical focus and equilibrium are shifting, with a strong increase in the weight of Asia-Pacific on the global scene.

Hence it becomes relevant to understand that R&D activity and the development of advanced technologies tend to be concentrated both geographically and at the corporate level: at the global level, a small number of companies are responsible for a high percentage of private R&D spending. At the global level, the headquarters of the main companies in R&D spending are concentrated in a few countries –mainly the USA, Japan and China– and nearly 70% of their total spending is concentrated in just 200 companies9.

Spain has not been able to take advantage of all opportunities associated with the digitalisation process, and this results in opportunity costs in terms of growth and job creation.

The digital transformation also entails a profound change in the skills of workforce, at an accelerated rate, resulting in a disruption of all major industries and impact on the entire production, management and governance systems. The countries in which the workers make the most intensive use of ICT also feature a greater proportion of non-routine jobs that entail complex tasks10. Effective use of ICTs requires both a greater number of specialists and better digital skills among the population in general. As in all previous large-scale economic transitions, the process, which is more revolutionary than evolutionary, is not going to be smooth or lacking in frictions, and its results will be determined by the attitudes and policies adopted at the national and international level.

At present, the main goal of the different countries is not so much achieving certain levels of connectivity as understanding that these levels are only the first step to setting up the bases necessary to deploy the new technologies that are called upon to reconfigure industries, companies and people’s ways of living and working: ubiquitous mobility and connectivity, cloud services, big data analytics, IoT, artificial intelligence, robotics, digital manufacture, etc.

The use of ICTs is not an end in itself, it is a means for advancing the economy and the society: not only are technological capabilities going to improve, but there will be a change in the fundamental way that human beings, technology, businesses and the society interact.

The goal of this project is to serve as a point of departure and reference for conducting a periodic assessment of the level of digital development in Spain, by combining vectors and indicators that help to capture key aspects of this development, enabling us to:

Before taking up Spain’s situation in the digital domain in depth in the analysis, it is relevant to dedicate a moment to the process for selecting countries to compare it with. Given that the main purpose is to identify strengths and areas for improvement, we have taken into account the following factors when selecting countries:

Taking into account the criteria defined in the context for analysis, we have taken as the initial reference group for this study the countries that are members of the OECD (all of these, except Mexico and Turkey, with high purchasing power, according to the World Bank), and to these we have added some countries selected from Eastern Europe.

Among these, two groups are especially relevant for the analysis:

Measuring and comparing progress in the digital field is not an easy task, and it requires searching for a balance among the different dimensions of digital experience in different geographies.

At present there are numerous analyses that attempt to index, compare, sort or classify different countries, regions or cities in the digital domain based on different methods and criteria. In this article, we have conducted an in-depth analysis of these in order to select the dimensions that enable us to understand Spain’s position in the digital field.

The main challenge of this project is, however, the dynamic nature of the digital field itself, and hence this selection remains open to be updated and adjusted to the changes that may take place.

You can consult all studies in the bibliography. 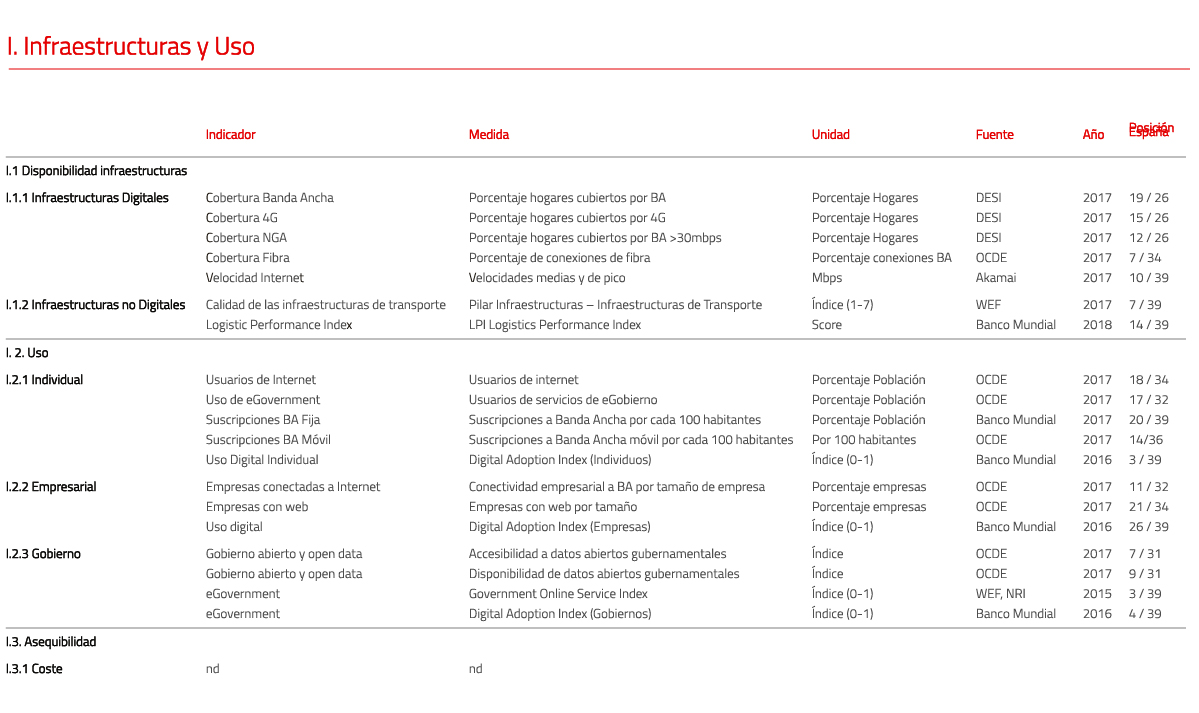 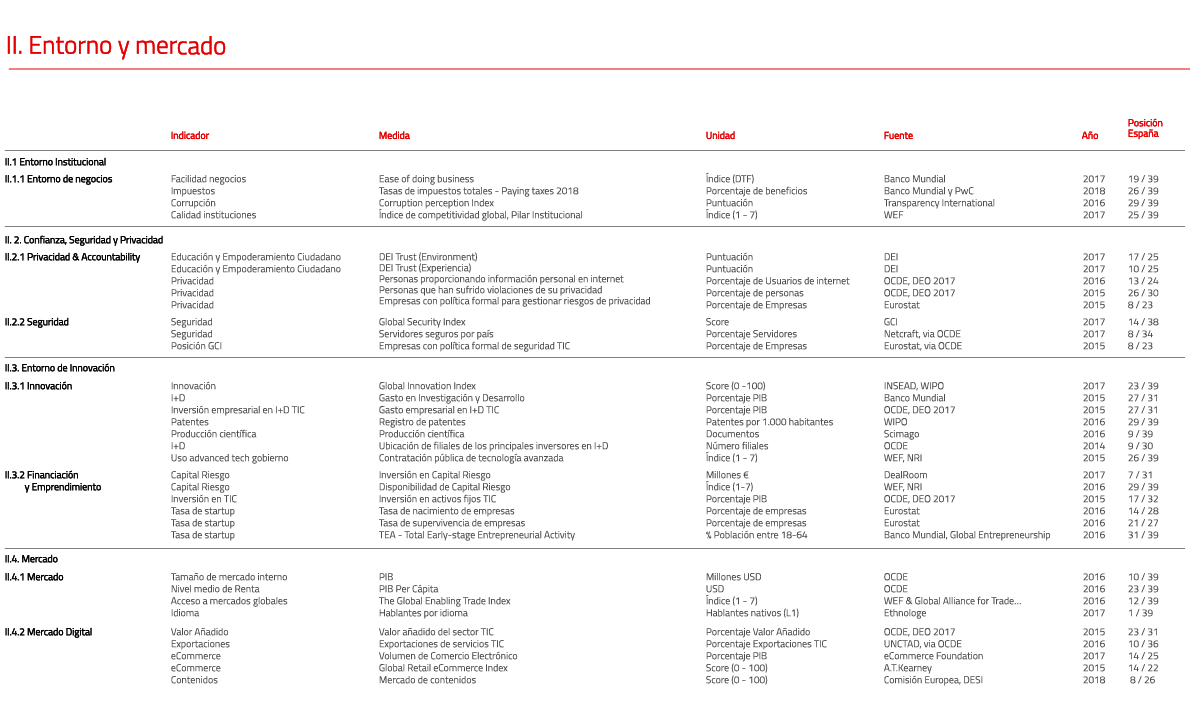 scroll
We use cookies to obtain statistical information on the browsing of users through the web. If you continue browsing, we will consider that you accept its use.
OK Read more